It all began with a cabinet. Daniel has always loved making things, he studied a very eclectic course at university, Expressive Arts, that sort of permitted anything. I was actually at the same university at nearly the same time, and I remember the students from this course doing everything from drawings to happenings in locked rooms to dancing acrobatically with ribbons. But what course do you pursue when you are interested in all kinds of art, you want to keep your options open as long as you can. Daniel eventually narrowed down to sculpture, and enjoyed the physical properties of wood so much that he kind of ended up becoming a furniture designer, even then he managed to include a lot of metalwork too.

Anyway back to the cabinet, it was during his career path as a furniture maker, he used porcelain for the cabinet’s feet and the handles, and having to fire porcelain again set off all kinds of sparks in him. It was so malleable and responsive, more than wood, and you can work it until it is papery thin, and it responds to light in such a varied and organic way.

So even though Daniel had not formally studied ceramics, he has chosen it as his main material because it can be made to do so many things. He can usually work out how to achieve an effect he wants, although he goes about it in a very unconventional way. You feel much about Daniel is about the energy he derives from swimming upstream. He works in a combination of ways not many other ceramicists would, he makes moulds for liquid porcelain, he throw large pots on a wheel, he use little sausages of clay, which is the most manual, the most intimate way of building a sculpture, every little piece is put there by the interaction of his eye and his fingers. Ever the experimentalist, some of his latest pieces incorporate glass, he needs not feel at all bound by categories; he is craftsman, artist, maker, whatever-he-wishes.

One very striking line of objects in the studio right now is lamps that look like melons, or irons, or coffee pots. The objects he sources in charity shops, defunct and otherwise unavailable. He picks things for the inherent beauty of their shape, and then makes moulds, and casts them in porcelain, elevating them to something fragile and aesthetic. They look remarkable gathered en masse, glowing orange and yellow, like something from a temple to Roland Barthes.

He talks about the importance of the table as a locus for the things he plans to make. How we all gather and eat together, around the table, promoting communality and affection. A table full of food and vessels is a lovely thing, he says, talking about bowls encouraging interaction, being passed around. There seems to be something significant here, the passion and dextral skill he expends to fashion his work, his hands press and shape every tiny part of what he makes, he wants that profound personal investment to yield something, admiration maybe, but most importantly he wants it to be a catalyst for love.

As well as his studio, you can see Daniel’s work at Rosebery’s Auction Rooms (part of the Dulwich Festival). And there are lights and mobiles on display in numerous London locations. His website, listed on the inside of this broadsheet, has a full list. 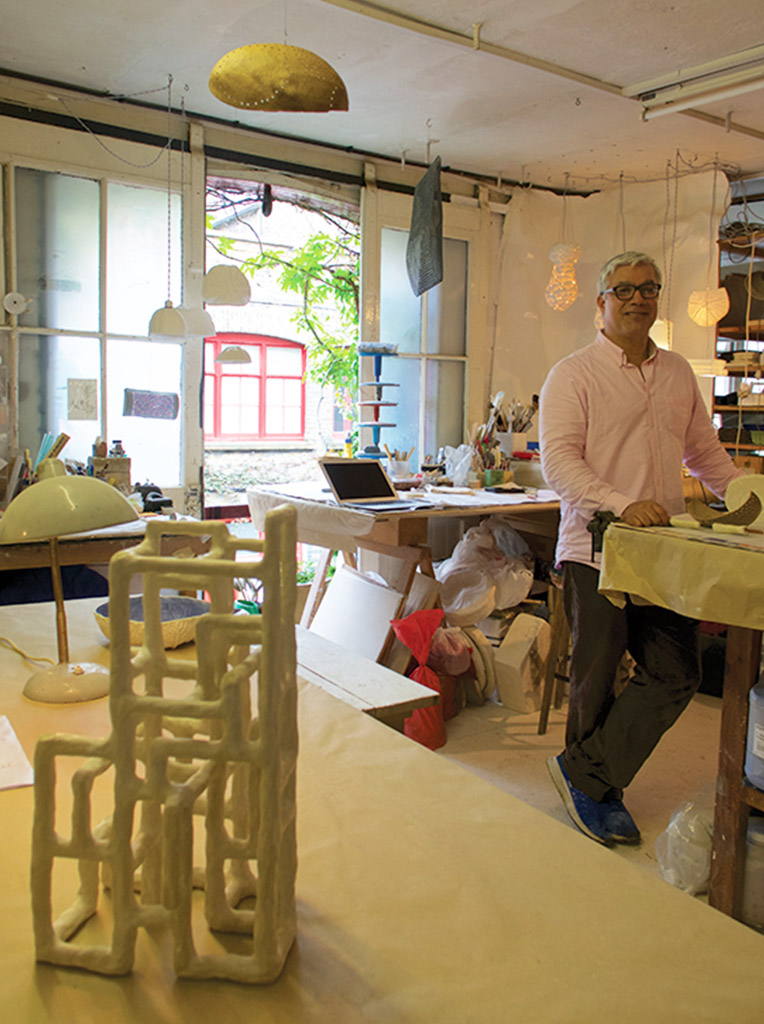