LIFE IS A RIVER 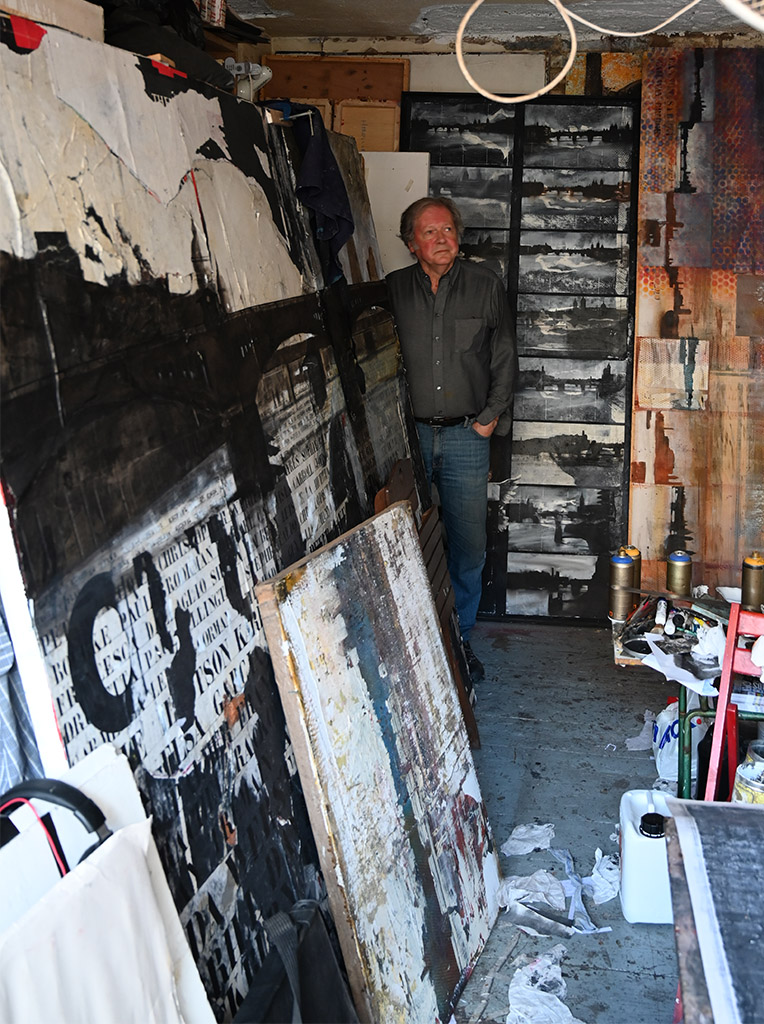 One of the longest serving residents of Pullens Yards, Dale has had a studio here for thirty-seven years. Back then the artists had to be made of sterner stuff than now, there were no toilets, the studios had no electricity, freezing in winter, and much of the surrounding area was occupied by travellers and squatters.

As his life grew more sophisticated Dale became a commuter, dividing his life between his home in Battle, near Hastings and his studio in Pullens. The train that brought him from leafy Sussex into Cannon Street station, with the very last slow part of the journey rolling over the tracks on the Cannon Street railway bridge over the Thames, flanked by Southwark and London bridges, was to have a profound effect on him.

He began to make images of what he was seeing and experiencing on that part of the journey, realising that the city at that point was an epicentre of history, with connection to the past, as well as giving him all the classic aspects of landscape, the light, reflections in the water, the interplay of sky and water, the powerful silhouettes of the bridges and skyline.

Both the train movement and movement of Nature; light, clouds, water; makes the experience nebulous, there can never be an exact moment. Each second of each journey is, in its way, entirely fresh. Each journey is an entirely new start.

As a response to this idea of change, Dale’s paintings are themselves not static, continuously worked on, worked over, layers burnt off with a blowtorch, paint stripped, scrubbed off with an electric sander – and new layers slowly added and painted over and over, with palette knives, stencils. He has experimented with materials, not just stretched canvas, but wooden panels, adding the pages of books, gluing drawings onto the paintings, image sizes from gigantic to tiny, and multiple images of one surface, sets of pictures.

He is looking for unexpected effects, creating the context in which accident can join deliberate mark making, and get him closer to the unselfconsciousness. Connect him somehow to the coincidences and overlapping aesthetic effects of his Cannon Street journey. This same kind of self-abnegation was sought by artists like Joan Miró and Jackson Pollock, who developed automatic drawing and action painting as ways of accessing the same creative fluidity Dale is after.

Not surprisingly Dale considers the paintings never completely finished, some are returned to months, even years, later for more work. Yet, “at some point you stop”, the image brought to a close when instinct, or an exhibition deadline tells him to stop. He realises after years of this work, that the real motivation is not the Thames or bridges, or replicating the experience of being there, but the process of making itself. The paintings and images are testimony to an unending creative engagement.

As an observer, the obliteration and accretion, captures in artistic form a parallel to what is going on in that part of the city, buildings being destroyed and new ones built, the river’s surface roiling, the water bringing silt from elsewhere, night falling, day rising – nothing ever still. And he captures something profoundly true of Humanity, and profoundly true of Nature, in all that change.