For some years, Peacock Yard has hosted young artists who have trained at the local City & Guilds of London Art School. Their studios are arrayed with seasoning planks and beams and blocks, and various kinds of saws, benches and vices, mallets and bundles of chisels; creative havens for the intensive business of working wood.

City & Guilds, which was founded in 1854, is almost unique in teaching such an ancient art. This is the School’s description of the course most of the Peacock Yard carvers follow: “The Woodcarving & Gilding Pathway of our new BA (Hons) Historic Carving course, is a comprehensive, three-year course that will prepare you for a fulfilling career in architectural heritage as a professional woodcarver. Whether your ambition is to create new work in historic contexts or to restore sculpture and ornament, your aesthetic and historical knowledge will be as important as your manual skills.

“On this course, you’ll develop this wide range of skills and will graduate fully equipped to begin a successful career. The curriculum focuses on the wide range of skills required to become a professional wood carver. These include not only advanced carving techniques, but also drawing, modelling, frame restoration, casting, portraiture, artistic anatomy, ornament study, gilding, heraldry, design and the history of carving in architecture and sculpture. You are also introduced to repair and restoration techniques and to relevant conservation practices and ethics.”

Enjoyed woodwork at school, and somehow ended up in Canada on a working visa, snowboarding during the day, and working on timber frame houses to earn money to snowboard. He got “really into” working with wood, especially when he started making his own furniture to furnish the little cabin he was living in. After his fill of snowboarding, he returned to Britain, and stumbling across the course, feeling that it offered a more “adventurous endeavour” than joinery. He is now studying on the new Post Grad Diploma course, drawing as much as he is carving.

Studied English, tried an “office job that drove me nuts”, then bookshops. She took a joinery course, and wanted more of the same. She found work with a treehouse company, then onto McCurdy & Co, famous for building the Globe Theatre in the 1990s. Architectural woodwork gave some satisfaction, but Cass wanted more personal control. The first day at City & Guilds “she fell in love” with the craft and aesthetic impact. She has had an eclectic start to her career, wooden memorials, furniture, and decorative work for a newly built green oak frame house.

Apprenticed in carpentry and joinery. But he found joinery frustrating, describing the disappointment of having someone “just walk through” a door he had worked on for days. He wanted his work to elicit greater affect. He discovered the City & Guilds course, liking the teachers and the wide variety of skills on offer. Drawing is now of great importance to him. His work errs towards the figurative, current pieces are a newell post of intertwined animals, a dragon, and coats of arms.

First became interested in wood and making through his grandfather who restored clock cases. Michael went on to study physics at university, but in studying it realised he didn’t want to spend his life immersed in it. He took a joinery course, and so loved working with his hands, he looked for a place to study more deeply. He was attracted to City & Guilds, since it teaches students to understand the principles and history of carving and yet also the practicalities of taking up a commercial career. Michael is particularly drawn to late medieval carving, when the craft reached its apogee of technical and artistic ambition. He has spent time working on restoration of Augustus Pugin’s gothic woodwork at the Houses of Parliament, and on ceilings at Mercers Company in the City of London and Peterhouse Cambridge. 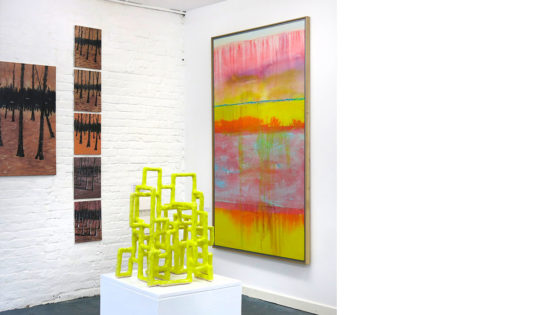 It’s like the story of a band forming, three artists coming together for a shared endeavour. Simon Hiscock, Angela Lucas and Peter Massingham have each lived or worked on the Pullen’s Estate for many years.

“As long-term workshop tenants we were aware of the many creative people living and working on the Pullen’s Estate. We wanted to provide a platform for showcasing the work made here, both by artists and by people who would otherwise struggle to have their work seen in a public domain.”

The Yards’ first opening in 1990 was originally part of the Whitechapel Open, indeed it was the most southerly outpost of it, the first flyer featuring mostly painters, and with the imprimatur of the mighty Whitechapel itself.

The Whitechapel Open dates all the way back to 1932, when it was launched as an exhibition called The East End Academy at the Whitechapel, to feature “all artists living or working east of the famous Aldgate Pump”. This evolved to include possible visits to artists’ studios, and by the 1970s had become the Whitechapel Open.

The link to the Whitechapel Open was broken by the European Exchange Rate Mechanism recession of 1991-2, and Southwark Council’s inexplicable hiking of rents, which caused many artists in the Yards to shut up shop. When it began again, the Open Studios was confined to the Yards, yet usually with an eclectic pop-up exhibition by Simon, Angela and Peter in whatever studio space they could finagle.

“Our aims, as curators, are to promote the visual arts as a vital and integral part of self expression and self realisation, creating the opportunity of engagement with others which contributes to an evolving and civilized community, and that community contributes to a wider society.

“We share a belief that the ‘art establishment’ is somewhat bogus – a stultifying hierarchy which sets trends and fashions that restrict genuine creative expression.

“To celebrate the genuinely diverse work created within our small community, our approach has always been inclusive. As curators, we don’t apply a thematic selection process and provided we have sufficient room, we accept any submission without imposing an artistic or political ideology. And so, you could expect to see photographs by a fireman (who has never previously shown his work) alongside the highly collectible paintings from the internationally renowned artist Frank Bowling RA OBE.

“The mix of work from enthusiast to professional generates an extremely positive response from both the immediate community and wider public. People are able to see how their creative ideas can contribute to an inclusive community identity – one that is creative, enlightening and educational.”