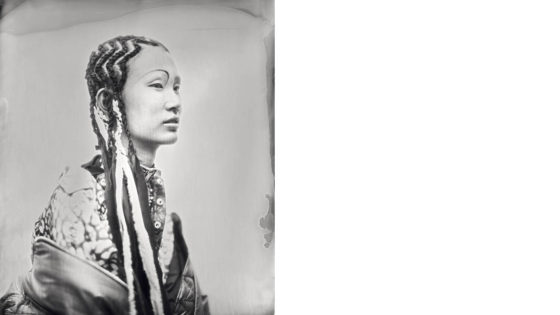 THEN IS ALSO NOW

Kasia, as her name suggests, hails from Warsaw. She came to Britain fourteen years ago, learned English, studied at the London College of Communication and photography at the London College of Fashion. She first encountered wet plate collodion as a technique half way through her training, and was immediately fascinated by both the images it produces and how it slows down and intensifies the process of making a picture.

The internet has greatly speeded up our consumption of images. My daughter, for example, who at eight years of age has probably seen ten times the number of images Kasia had seen at eight in a Poland only just starting to recover from the impoverishment of every aspect of life brought about by Marxism. But how many images will my daughter remember, how many does she look at long enough for them to burn themselves onto her retinas, and absorb their mysteries? Kasia’s father was a photographer, using the heavy and indestructible cameras available behind the Iron Curtain, Prakticas and Exaktas, with Carl Zeiss Jena or Russian lenses. He processed film himself, and printed, which if you have never done it, is a kind of miracle, using aesthetics and chemicals to freeze a moment in time. He brought photographs for Kasia to pour over.

So Kasia grew up seeing her father record and aestheticise the world around him, and she studied monochrome images in her family’s photo albums, showing herself in the past, and people she knew, and people she vaguely knew. All emotion and imagination stirred by the potency of an image. She studied old cartes de visite found in junk shops, she says the image exerts “a trick of the mind”, which frees the imagination to summon up the lives of the people presenting themselves to the camera, imagining the true colours of their hair and clothes, what they thought about, how they spoke.

The method she has chosen to work with is wet plate collodion. Which involves chemicals being carefully layered onto a sheet of aluminium or glass in the darkroom (which is a portable one when Kasia works away from her studio), and then covered and placed in a frame that can be loaded into the camera back. The camera looks like one you see in a Western, a wooden box on a tripod, with a black cloth at the back, a lens with bellows. This is not a rapid way of taking photographs.

She shoots people. Split between fashion and portraits – although the fashion is undertaken as if it is portraiture. The great advantage of the process is how it encourages Kasia and the model to think about each shot, its more akin to theatre with everything in the frame thought about, like creating a tableau, far from the rapid-fire-increasingly-wild cliché of fashion photography; Austin Powers or the photographer he was parodying, David Hemmings in the movie Blow-Up.

Kasia has stayed in London because of its diversity, the world in a city. Here she finds the cultural mixtures endlessly interesting. You can see this love of collisions in her work; past clashing against present, spontaneity crashing against permanence, beauty being subsumed by the swirl of chemicals. 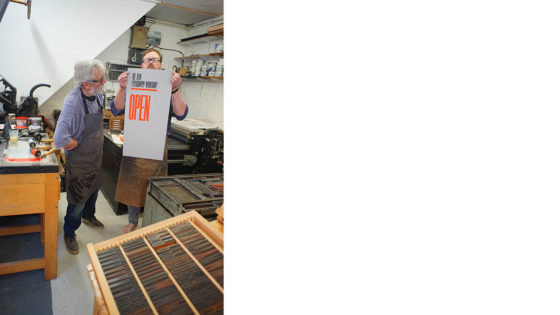 Their ambition is nothing less than a new art school. Based on something most art students rarely encounter – discipline. Because what at first seems to be an Aladdin’s Cave of alphabets, ink pots, wooden type, drying racks, and printing presses takes discipline to operate. Their manifesto offers both a promise and a challenge to today: “as an antidote to the immediate & often dispensable nature of modern technology, the slow articulation of the technical side of letterpress allows the designer to immerse themselves in the focus on craft & revel in the simple joys of making”. They plan to pass on their knowledge, and develop student’s skills with a programme of workshops.

Alan Kitching is a well-known innovator in graphic design, he has spent fifty years first learning the craft of letterpress and wood letter printing, and then using it in ever more inventive ways. His monograph “Alan Kitching: A Life in Letterpress” was published two years ago. Kelvyn is an experienced teacher, and has an highly varied portfolio of work – commissioned and self-motivated – that shows he is of a like-mind with Kitching; although letterpress is beset by restrictions in how it must be set up and handled, those restrictions can melt away to yield typography of the most imaginative and unexpected kind.

After all, much of the greatest innovation in typography to date – from the playful geometry of Hendrik Werkman to the precision of Jan Tschichold – was all made using exactly the same metal and wooden type, viscous inks, and heavy iron presses in this workshop. Indeed, Johannes Gutenberg’s workshop would have looked very similar, we are channelling history here, a living connection that runs backwards through five hundred years of typography.

I have done one of these workshops, with Alan Kitching, and discovered more in a day than a decade of reading books and fiddling on computers. The first revelation was that the type is physical, you have to lift, carefully position, lock, ink, pull, to get even one letter onto a piece of paper. The process itself leads to consideration, weighing, deciding, which is simply not there with a computer. The second revelation was about aesthetics; the old typefaces, the way letters looks made of metal, the aged wood, the smells, the coarse paper, the entire process is an aesthetic overload.

The website lists the range of courses to suit every level of capability from civilian to experienced, and the fonts and equipment available, sufficient to enable infinite variation. And they have amassed a long list of visiting consultants, that reads like a who’s who of current British design; Anthony Burrill and Hamish Muir of fabled design group Octavo to name but two. Any student or young or even older designer lucky enough to come and study here is going to leave stuffed with all kinds of knowledge; a firm grasp of typographic theory, lots of practical ideas, and creative inspiration to last their lifetime.